Deprecated: Assigning the return value of new by reference is deprecated in /home7/mw160012/public_html/english/wp-content/plugins/srlatin33.php on line 122
 Discovery of Yamna ocher grave culture in the Meadows | NATIONAL MUSEUM OF PANCEVO

Discovery of Yamna ocher grave culture in the Meadows 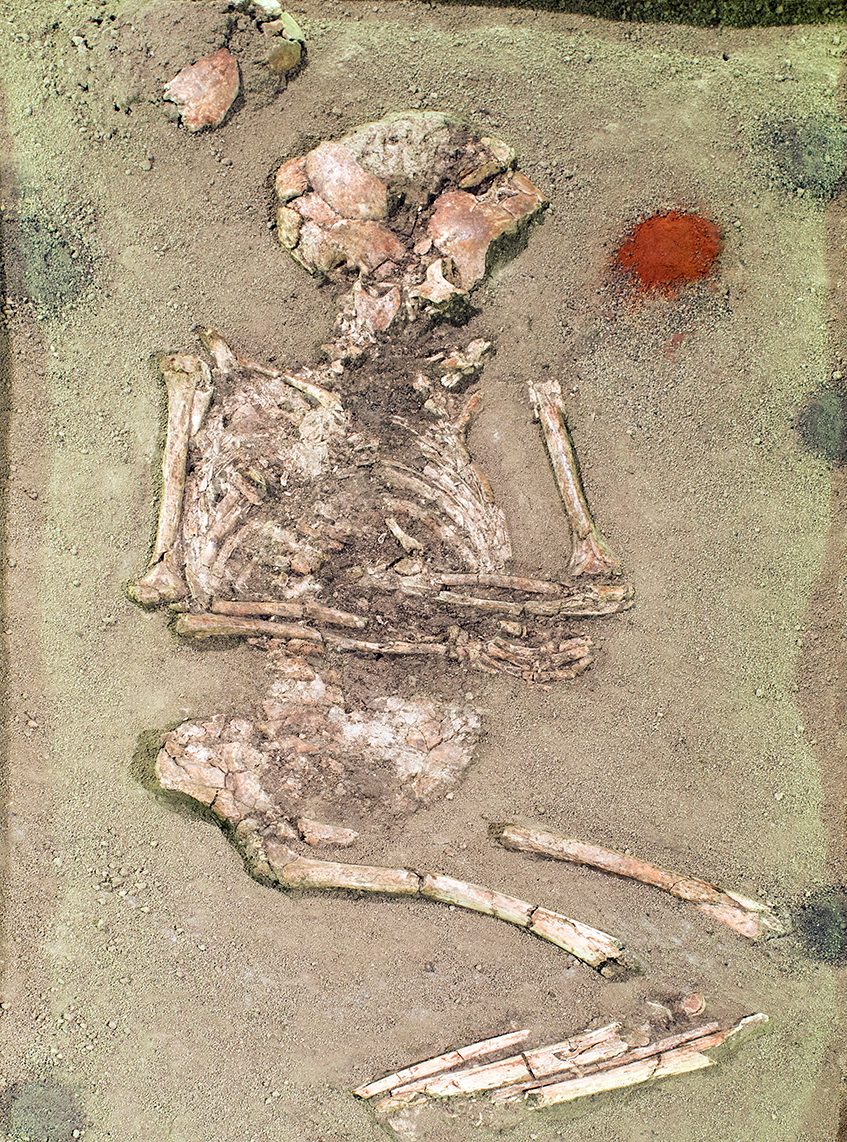 Discovery of Yamna ocher grave culture in the Meadows

At the end of the fourth research campaign of medieval church in the meadows, in November 2013, on the site of the church interior at the level of subsoil, it was spotted a rectangular outline of the grave, in which was discovered ocher grave of eneolithic Yamna culture burial under mounds. This confirmed what was assumed ever since discovering the site in 2007, because the site is already labeled as “mounds mild elevation with diameter of about 40 m and a height of about 0.5 m”, which could occur during the eneolithic period.

The medieval church, which was fully researched, was built on the highest, central part of the former eneolithic burial mounds. Based on its location in the interior of the church, discovered tomb could be central, and possibly the only eneolithic grave mounds. Raising medieval churches significantly influenced the appearance of the mound, as the central and the highest part of the hill leveled to the level of today’s height of approximately 0.5 m. Central eneolithic grave has been preserved to this day only due to the fact that after the construction of medieval churches, burial did not take place in their interior.

At a depth of 1.25 m, measured from the surface of today’s soil, the skeleton was found of young person. Buried in a pit of a rectangular shape with rounded corners, measuring 1,38x 0,8m. The walls of a pit are more or less vertical. Along the longer edges of a pit, at different distances there are circular pits with a diameter of 6-8 cm. Although there weren’t found any remains of wood, these are traces of sharpened logs that marks wooden structure of a tomb. In dark hole of the grave, it was found a fragment of animal bones belonging of cattle (Bos Taurus).

The deceased was laid on his back, in a southwest-northeast direction. The skull is on the southwest and is placed on the left cheek. The arms were bent at the elbows and placed on his stomach. The legs were bent at the level of the pelvis and the knees, but subsequently fell to the left, or to the north. Based on the anthropological analysis, it is person aged around 13-15 years, so far without the possibility of determining sex.

At the bottom of the pit below the skeleton it was noticed darker color than the surrounding yellowish subsoil, but it can be assumed that the deceased was laid on a sort of cloth or mat. On the left side of the skull at a distance of 15 cm, there was found a nugget ocher. All the bones of the skeleton were covered with ocher, especially in the area of the skull. Part of the skull was damaged and several fragments of its bones were dislocated due to animal activity. In one pit, near the ocher grave, also due to the effects of animals were found two identical silver rings and crumbs ocher beside them. These dislocated objects can be linked into a whole with ocher grave and primary were located probably in the region of the skull of the skeleton. Functionally they could be part of hair ornaments (Lockenring), how are commonly found in graves under mounds of Yamna culture.

The custom of burying the rectangular shape of the grave, the existence of the wooden structure, the position of the skeleton in the grave, the possible remains of rugs, the use of ocher and of hair ornaments, which could be part of the grave inventory, clearly is placing this finding under the Yamna culture, most probably in its “classic” phase, which occurs in this region during the period 3050/3000 – 2880/2500. the BC.